Yes, I’m Writing, But… There Were Goldfish, You See…

It started inauspiciously enough. I knitted a few balls out of leftover black, white and gray yarn. Little, round, baseball sized orbs that quickly became dog and cat toys. I knitted more, up to softball size, some with color changes of black to gray to white. I decided they were Zen balls, good for squishing while attempting to meditate on life, and gave them away, mostly for people to throw at each other in a very un-zen like manner. I’d post a picture, but unfortunately, the only one I retained is thoroughly covered in dog slobber, and is not a very appetizing sight.

Then came the goldfish. Innocently enough, I spotted the pattern, and thought ‘Wow, I know a few pint-sized people who would like those.’ So I knitted orange goldfish and dropped them in the mail to swim their way around the country. 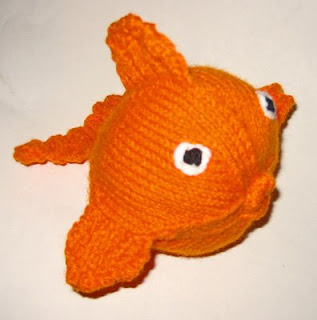 Knitted Goldfish
Apparently, knitting four goldfish didn’t get them out of my system, so I knitted two more, one in the last of the orange, and one in purple, because really, what small fry is going to complain if his goldfish isn’t regulation color? The more obnoxious the better, when it comes to kids and stuffed animals. 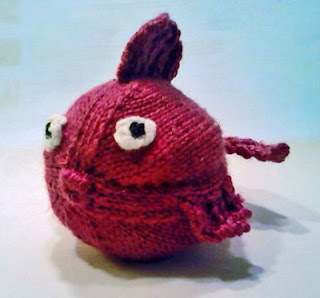 Knitted Purplefish
Of course knitting is like writing poetry, you can’t stop with just one. So I knitted socks, 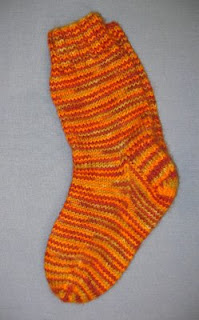 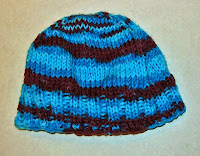 and now I’m working on a Norwegian mitten pattern. 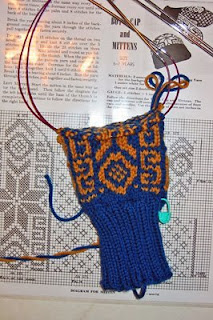 Star Pattern Norwegian Mitttens
Knit Picks Swish Wool
I could say all the knitting cuts into my writing time, but frankly, I can’t do one thing continuously all day, even write, as much as I'd like to. I knit when I have a free moment; before work, after dropping Son Two off at the high school - they start earlier than I do, waiting to see the doctor, dentist, etc., before bed in a vain attempt to relax, (Ack! I followed the wrong line on the chart and the pattern is off… eh, no one but me will notice) and while waiting for dinner to cook... instead of washing more dishes. (That’s why doG made paper plates…)

Knitting is a great way to two-track your mind, I can ponder character motivations, or poetry revisions while adding a few rows to a project. And I’m never without a project to knit on, at last count, I had nine UFO’s. (Unfinished Objects) Well, nine that I'll admit to...

The drawback to this method is forgetting about a project for say, oh, a year, and picking it up again and having to figure out where I left off in the pattern, because I am not all about notes and details like markers, you see. The advantage? I’m a much better knitter than I was a year ago, so I’m quicker to figure out where I left off. Just think, in another year or two, I might be able to knit a project straight through, without dropping it for a neat sock pattern I just found on the Internet. (Darn you, Ravelry!)

I’m sure there will be loads of other distractions to keep me from doing what I should be doing at the time. And for the record, yes, I wrote a poem today. A rather harsh poem about my intense dislike for telephones and their annoying rings, and how I should yank the darn thing right out of the wall, and just keep my cell, which I can put on silent and ignore if I wish. I know, I know, I could ignore the landline, I should ignore the landline, but I can’t ignore it … and that’s a whole 'nother fish story. 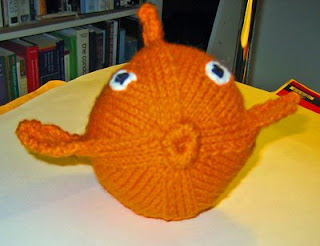 If those aren't the cutest things besides, ummmm, CORGIS!!!!!! Love them! If only you lived closer, you could spend your spare moments tutoring your brother's Sig O on all the neat things you do that she wants to do! (In other words, the little sister you never had, except I am older than you...)

Nonny,
If I can make a knitted Corgi, Anonymous is in trouble. *g* If I could afford to live there, I would. Tell Anon to find me a job...
I'll take a sister, big or little. Maybe I can trade my brother in!

I smell something fishy,like a conspiracy.

Just a warning sis,nonny is known to be a double agent.

Heh Heh, we will leave him with a "knitted brow", worried that there may be a conspiracy ummmm, shall we say "afloat", and that his Nonny-Hari may turn on him in some covert way. Can morse code be sent via clicking knitting needles???

Nonny,
I'm sure Anon will be too tied up with his new Blackberry toy to pay attention to us. *evil grin*

Now those goldfish are cute :-)

I like the Norwegian mitten pattern. I have something similar in cross-stitch (unfinished, since you ask) that claims to be an Icelandic pattern. Maybe Unn the Deep-Minded took it with her.

Those fish are sooo cute. You should try for a Nemo pattern next. :)

I give thanks for the wonderful Thanksgiving dinner we just had.

Roast Corgi with all the trimmings....slendid!

That's quiet a hobby! And yes, writing is often not thought of as strenuous, but it truly is.

You have a great site here! Lots of cool links for poets and writers.

Do you ever blog your poetry?

And if you wondered, I found your site through the verve network thingy.

Carla,
I like all of the patterns - Norwegian, Icelandic, Swedish... of course I'm just learning the technique so I can design my own. :P

Gabriele, you're the fifth person to say that! Trying to math out some tropical fish now. Angelfish, and yes, maybe a Nemo.

Anon, if you had corgi for dinner, you should be happy and bouncy!

eric1313
If you search back through my blog you'll find poetry and poetry essays. Glad you stopped by - nice to know Verve Earth actually does something besides sit in my sidebar. :)

He's happy and bouncy alright, just like a recently burped baby... He waited for days for your reaction to his entry, just like an attentive Corgi keeping watch at the window for the food provider to return.

Nonny - Methinks Anonymous needs a new hobby. I think SUNY has basketweaving, don't they?? And how come I haven't seen any Thanksgiving pics? Is his shiny new cell phone sans camera???