Never Drop A Parasaurolophus On Its Head

Brought to you by Creative Procrastination Techniques, and the letter "W".

I've been writing, honest, 9 new poems and half a short story, in addition to editing, editing, editing - novel and poems and getting ready for the new WyoPoets chapbook. I also need to do a Year Of The Ox postcard for the Baren Chinese New Year Card Exchange. Researching my Ox took a while, but I managed to sketch out an idea I liked, dropped it into Painter to play with colors, then printed out a template.

The bad news was since I'd cleaned (well, some) my office, and rearranged, and shoved things into plastic tubs, I couldn't find my wood blocks to carve the Ox. I did come across a block of plasticine left from my sculptural days, conveniently sitting alongside a wire frame and baseboard. The wire framework looked suspiciously like... a dinosaur. A hydrosaur. Last time I remember being interested in hydrosaurs was when my eldest was five, and could recite every name and type of dinosaur with ease. I finally remembered, the wire skeleton was one of his favorites, a parasaurolophus. Digging deeper in the tub, I found all kinds of reference materials.

You know what happened next. 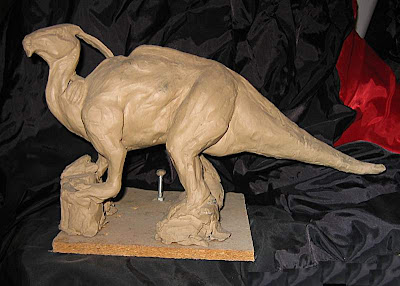 Before I realized it, I had a fledgling parasaurolophus taking shape on the armature. Next thing I knew, it was hours later, and dogs were making those, "Good doG, woman, aren't you EVER going to feed us we're starving here" noises. I stuck the armature and fleshed out dino on the corner of my drafting table, noticed a block of shina plywood stuck on the bookshelf next to it, reached over... and knocked Mr. Duckbill off the table right on to his fancy head crest. His cranium took a beating, as did the tail. I'll be spending my next round of sculpture straightening the fancy head dodad so it doesn't resemble a limp noodle, rebuilding the tail, so it doesn't look like a cat took a bite off the end, and yes, picking copious amounts of dog hair out of the plasticine.

I set the parasaurolophus in a safe place on a shelf, (away from my elbows), got out my woodblock carving tools and bench hook, transferred the Ox to the block, and did some preliminary carving. Somehow, going from smooth blocks of oily clay, to splintery wood and sharp, pointy cutting tools doesn't seem like the smartest plan, given my klutziness, but hey, at least I won't feel guilty if the wood block ends up on the floor. As it is, I had to turn the parasaurolophus around, so I wouldn't have to look at his bedraggled crest, and mildly acusatory expression, as if I had deliberately set out to give brain damage to such a stellar member of the Cretaceous dinosaurs.

Yes, it's been a long winter, why do you ask?

Email ThisBlogThis!Share to TwitterShare to FacebookShare to Pinterest
Labels: Art, Procrastination Techniques, Way Too Much Time On My Hands

I'm impressed with your sculpting skills, but... also wondering if it isn't time to reread bits of Pressfield's The Art of War? Just on the off chance that the dreaded "R" has taken the form of a Parasauroplophus...

David, I think you're looking at it from the 'glass half empty' perspective. I'm taking the "the glass is the wrong size" tact. I joke about procrastinating, but really, it's not Resistance as much as Contemplation. While slapping clay on the armature, my mind was free to turn my short story around, and nudge me to the idea that maybe my insistence on having it end a certain way was blocking other equally valid endings. Now I'm ready to tackle it with that in mind, and I'm much happier with the possibilities.

Nothing much may come of Mr. Parasaurolophus, but he served his purpose - jump start my brain again. :) And yes, the Year of the Ox block is carved and ready to print. And I'm ready to once again turn my attention to editing the FNFH. (Fantasy Novel From Hell)

OK. Got it. I do a good deal of contemplation washing dishes...

Heh. My teenagers don't understand why washing dishes and mowing the lawn don't appear on their chore list and end up on mine. *g*

I think poor Sophie got a clubfoot, too. :)

But be careful or you'll end up with a whole menagerie of dinos. Somehow, we never outgrow them.

Yeah, well, it's a rough out, Gabriele, club feet and flat heads are allowed. I'll get back to it... next year? When my kid has kids? :)
I used to know all the names of the dinosaurs too. Had to keep up with the five year old - Now he's almost 19, and dinos aren't his top priority anymore.

I was nuts about dinosaurs as a kid, but now I'd be hard put to name more than two or three. Most impressed with your sculptural skills.

Carla - thanks. :) Someday I'll use my powers for good, not.. dinosaurs. But it WAS fun.